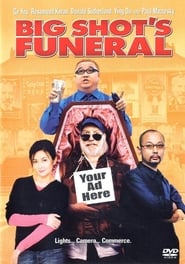 Yankie director Don Tyler faces mounting insecurity and declining health while on location in Beijing, so his assistant hires down-and-out camerman YoYo to take the reins. Scrambling, studio boss sells the sagging picture to a Japanese media company. But YoYo is determined to upstage the whole production by granting the director's wish to have a grand "comedy funeral". To raise the money for it, he auctions off advertising and sponsorships for the funeral to companies around the world. But wait...is Don getting better?