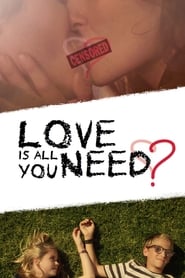 Based on the award winning critically acclaimed short film, "Love is All You Need?" is the theatrical feature length version that explores bullying, racism, and prejudice in a way never done before on the big screen. As you read this, a pre-teen or teen, in the United States has committed suicide. Teen suicide in the LGBT community has gained immense popularity on a larger social scale then ever before. While the interest in this social dilemma is thrust into the spotlight none have ever before addressed this social issue in such a manner as Kim Rocco Shields newest film. Love Is All You Need? thrusts its audience into another thought of existence that does more than just acknowledge there is a serious social problem affecting the gay community and does more than just talk about the issue. In Love Is All You Need? its audience lives the issue. Different people and their individual, unique lives intertwine and collide in a world confronted with controversy and forbidden love. This world is very much like our own: filled with family gatherings at church, kids playing in the yard and college frat parties. Except these families are led by same-sex couples, and homosexuality is the expectation. To be heterosexual is to be shunned and ridiculed because it means you are different. In this world, to be GAY is right and to be STRAIGHT is wrong. That's the world of Jude Klein, the star quarterback of the Sparta University football team. While celebrating her most recent win at the Phi Beta Lambda fraternity house party, Jude meets sports journalist Ryan Morris. The two quickly form a romantic bond that must be hidden from the rest of the world. The cold and cruel local priest Rachel Duncan discovers this secret affair, inspiring her to fervently organize a hateful campaign against the local "hetero". Meanwhile, 11-year-old Emily is often teased at her elementary school and is kicked off her school's football team. She finds comfort in her new friendship with Ian Santilli, one of her male classmates. Ashley begins to form a crush on her new playmate, despite how strongly her mother Karen is against being straight. These separate stories connect to each other in unexpected ways as each of them struggle with their own problems in this "gay" world. When you live in a world that hates the way you love, is really love all you need?