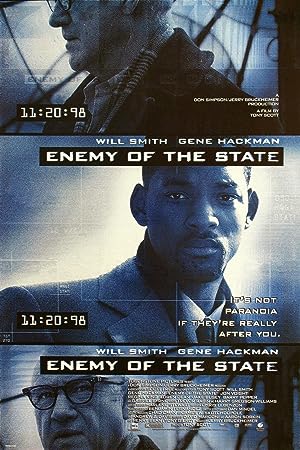 Enemy of the State

Robert Dean is a mild-mannered lawyer who works in Washington D.C. He is on the trail of a kingpin named Pintero. Meanwhile, a politician named Thomas Reynolds is negotiating with Congressman Phillip Hammersley about a new surveillance system with satellites. But, Hammersley declines; Reynolds has Hammersley killed, but the murder is caught on tape, and the taper is chased by Reynolds' team of NSA agents. The guy must ditch the tape, so he plants it on Dean (unbeknownst to Dean). Then, the NSA decides to get into Dean's life. That is when Dean's life began to fall apart all around him, with his wife and job both gone. Dean wants to find out what is going on. Then, he meets a man named "Brill" who tells him that Dean has something that the government wants. Dean and Brill formulate a plan to get Dean's life back and turn the tables on Reynolds.